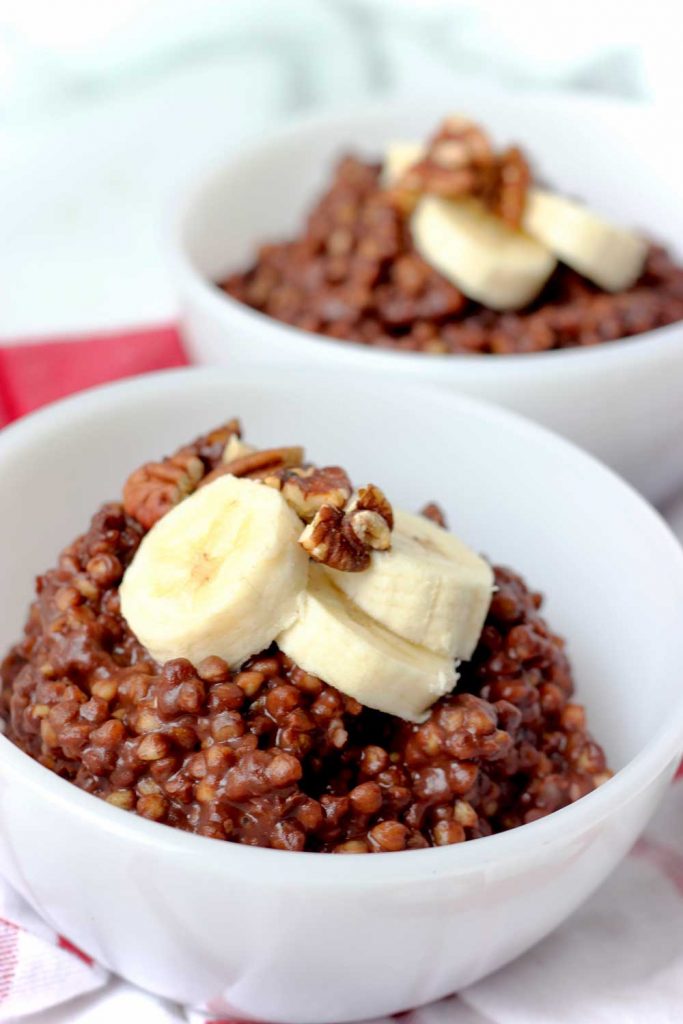 I don’t have a huge sweet tooth, despite what you may believe from some of the other recipes on my blog (hello avocado key lime pie).  But I do have a huge dark chocolate tooth.  (Yes, that’s a thing!) This is made obvious by my recipe posts for aquafaba chocolate mousse, cocoa date truffles and pumpkin dark chocolate chip cookies.  And now chocolate for breakfast?  Scandalous!  Have I gone too far?  Nope.  And here’s why…

Cocoa powder is actually good for you!  Like really good.  It’s considered a superfood by some standards.  Cocoa is high in magnesium, iron, and polyphenols which have powerful antioxidant and anti-inflammatory properties.  So, a little chocolate for breakfast is not only ok, it is beneficial to your health!

Now, onto the buckwheat…

What are Buckwheat Groats?

Buckwheat, despite its name, is not related to wheat and is gluten free.  Buckwheat is highly nutritious and is called a pseudo cereal because it is actually a seed, not a grain.  While it is not considered a legit grain, it cooks like one and is often used in place of grains in recipes, such as this buckwheat porridge.  It can also be used in place of rice with stir fries and curries or as a salad ingredient. 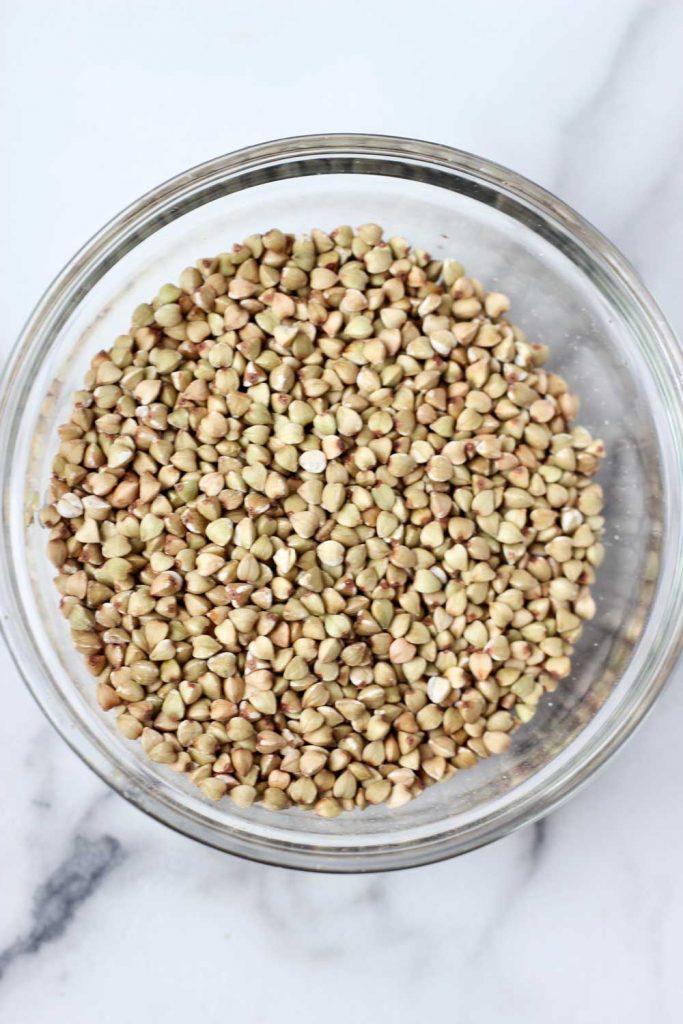 Buckwheat groats come raw or toasted.  When toasted, buckwheat is best known as kasha and has a rich, nutty flavor.  Kasha cooks faster than raw buckwheat groats, but this is not to say that raw buckwheat takes a long time to cook.  Raw buckwheat only takes 10-12 minutes, so either way, you’re in for a short cook time.

Do I Need to Soak Buckwheat Before Cooking?

To soak buckwheat, add it to a bowl with three times more water than buckwheat.  Allow to soak 2-8 hours, then drain and rinse thoroughly.  The buckwheat will be a little slimy after it soaks, so just make sure to rinse it well to remove.

Is Buckwheat Healthy for You?

Buckwheat is highly nutritious and, per cooked cup, contains approximately:

How to Make Chocolate Buckwheat Porridge

Chocolate buckwheat porridge requires less than 15 minutes to make and can also be made ahead of time and reheated making it a perfect weekday breakfast .

Add the buckwheat groats to a medium sauce pan along with 3 cups water, cocoa powder and maple syrup.  Whisk to fully incorporate the cocoa powder.  Bring to a boil over high heat and then reduce to a simmer, stirring often.  If you’ve soaked your buckwheat groats prior to cooking, you’ll only need to cook the porridge for about 5-7 minutes until it is soft enough to eat.  If you didn’t presoak the groats, simmer for 10-12 minutes until soft and most of the liquid has been absorbed.  Divide between three bowls and serve at the table with milk, more maple syrup, and desired toppings.  That’s it!  So simple, right? 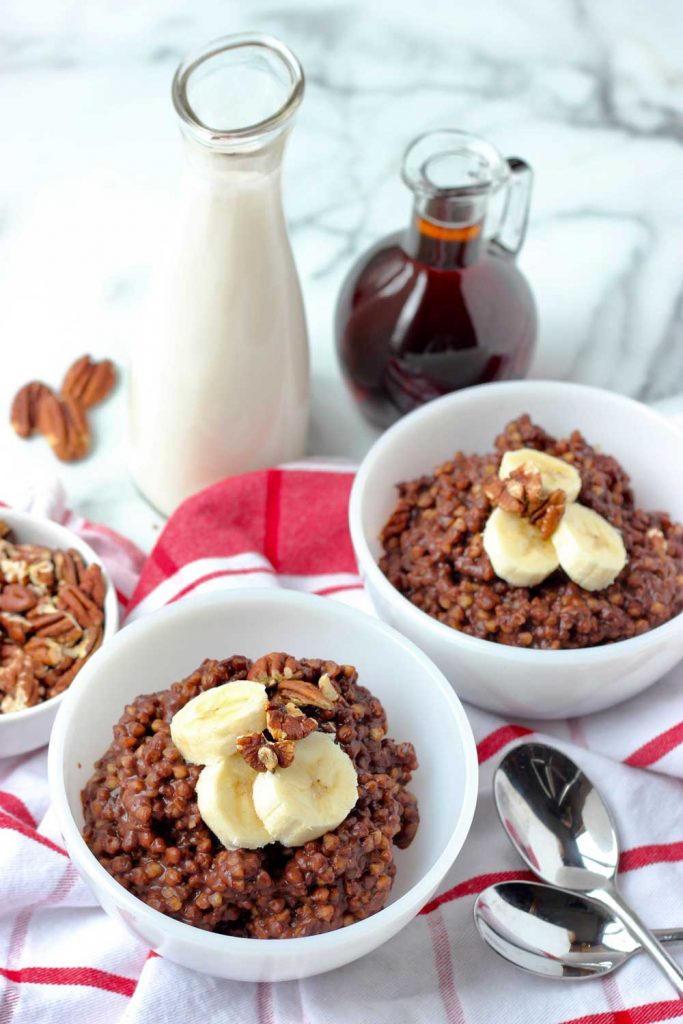 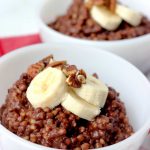 Print Recipe
No ratings yet

*Soaking buckwheat: It's up to you if you want to soak the buckwheat.  Some say it makes it more digestible, but feel free to experiment and do what works for you.  I don't typically soak mine because I rarely have enough forethought.  To soak: add buckwheat to a bowl with three times more water than buckwheat.  Allow to soak 2-8 hours, then drain and rinse thoroughly.  The buckwheat will be a little slimy after it soaks, so just make sure to rinse it well to remove any sliminess. Make Ahead: The buckwheat porridge can be made ahead of time and stored in an airtight container in the fridge for up to 5 days.  To reheat put in a saucepan with some milk or water and heat through, stirring often.
Nutrition Facts
Chocolate Buckwheat Porridge
Serving Size
0.75 cup
Amount per Serving
Calories
274
% Daily Value*
Fat
3
g
5
%
Saturated Fat
1
g
6
%
Sodium
73
mg
3
%
Potassium
384
mg
11
%
Carbohydrates
58
g
19
%
Fiber
8
g
33
%
Sugar
9
g
10
%
Protein
9
g
18
%
Calcium
94
mg
9
%
Iron
2
mg
11
%
* Percent Daily Values are based on a 2000 calorie diet.
Pin Recipe Facebook Share by Email

This site uses Akismet to reduce spam. Learn how your comment data is processed.

Hi! I’m Maggie and I’m so excited you stopped by! I am a vegan and gluten free chef and bring my expertise and love for food, health and wellness to Alternative Dish.  My focus is on creating easy recipes that are friendly to those with food sensitivities and allergies.  I believe that everyone can still eat healthy, delicious food despite their dietary restrictions. Read on to find flavorful recipes to suit almost any dietary lifestyle…