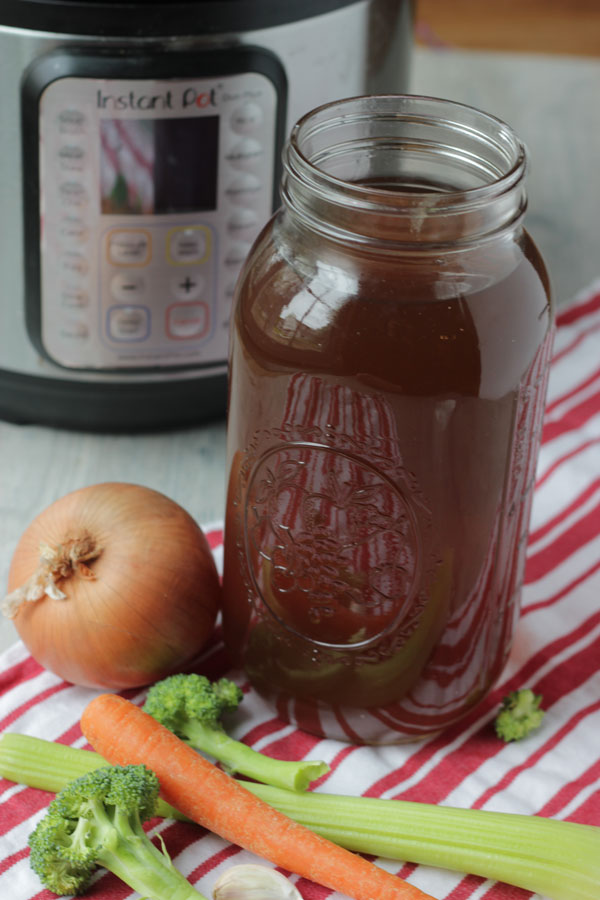 Don't Throw Out Those Vegetable Scraps!

Stop!  Don't throw out those carrot peels and broccoli stalks!  Did you know that you can save all those stalks and skins of vegetables and make a delicious veggie broth out of them?  Yes, you can.  And it's as easy as throwing them all in an Instant Pot with water and pushing a button. Doing this will save you money, give you control over the amount of sodium in your broth and make you feel good about using your veggies to their full potential.

Throwing away vegetable scraps and other food waste is not as innocent as you might think.  Food waste does not decompose in the landfill.  Instead, throwing food scraps in the garbage generates methane gas which contributes to trapping heat within our atmosphere (ahem, global warming).  It's estimated that 25% of all food purchased by U.S. households goes in the trash. Whoa.  That's a lot of money literally in the garbage.

So, what can you do to reduce your food waste?  First, the most obvious way is to eat the food you buy.  Buy only what you need and then commit to eating it before it goes bad.  Second, compost it.  Finally, use those veggie scraps to make broth!

What Veggies Should I Use to Make Veggie Broth?

Here's the good news...you can use any veggies you want to make veggie broth!  Vegetable broth is made simply by simmering or pressure cooking vegetables in water for a long period of time.  As the veggies cook, it pours flavor into the water to create a rich and flavorful broth.  So, any vegetable will work here, as long as you like the flavor of it.

I save all my vegetable scraps: large broccoli stalks, herb stems, cabbage cores, celery tops, carrot and potato peelings, etc.  I keep them in a large container with a lid in my refrigerator and make broth out of them once a week.  (Alternatively, if you don't want to make broth that often, you can store scraps in the freezer for later use.)  Then, when I'm ready to make veggie broth, I pull them out and I'm ready to go.  You can also use veggies that are past their prime to make broth: onions that have gone soft, carrots that are limp, celery that's starting to shrivel etc.

Once you've collected your vegetables, it's time to make the broth.  I generally use about 5-6 cups of vegetables plus a whole onion to make the broth.  Start by cutting the onion in half and roughly chopping any veggies that are too large to sit comfortably in the Instant Pot.  Next, add the onion and veggies to the Instant Pot along with 10-12 cups of water (based on the size of your Instant Pot).  Make sure that all the veggies are fully submerged and add more water if necessary up to the "PC Max" line on your Instant Pot. 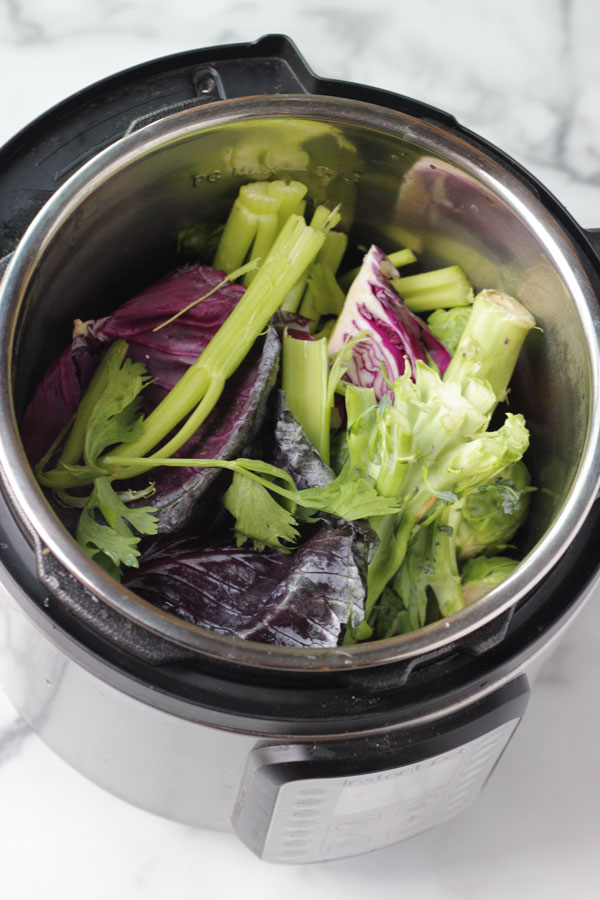 Set the Instant Pot to High Pressure for 30 minutes.  Once the 30 minutes are done allow the pressure to release naturally, usually about an hour.  If the pressure hasn't released completely after an hour, carefully turn the steam release valve to help it finish.  Remove the lid, stir in salt if desired, and allow to sit until cool enough to handle the pot. 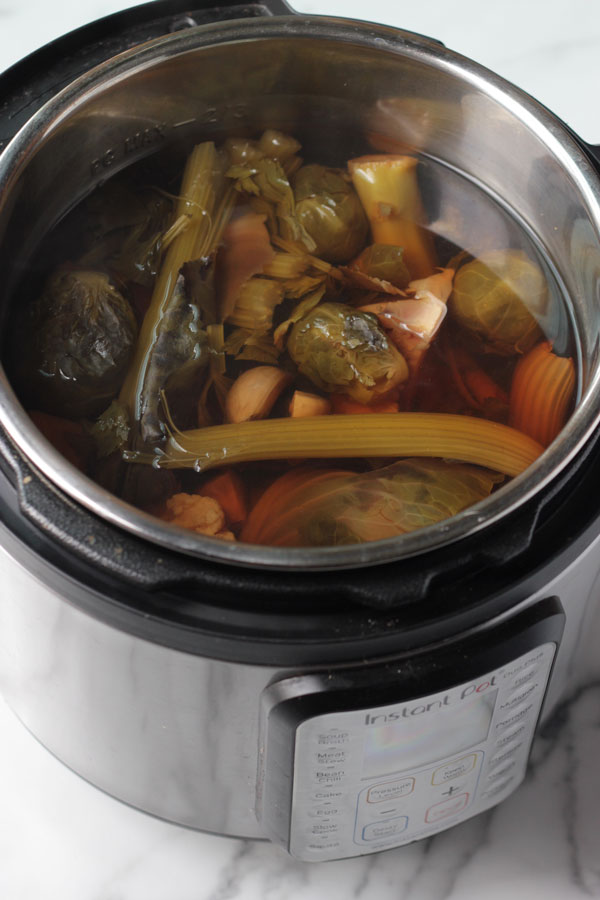 Once the pot is cool enough to handle, strain the cooked veggies through a mesh strainer or nut milk bag.  Press on the veggies with the back of a large spoon to press out all that veggie flavor and goodness.  Discard the pressure cooked veggies (compost them if you can!).  And you're done! 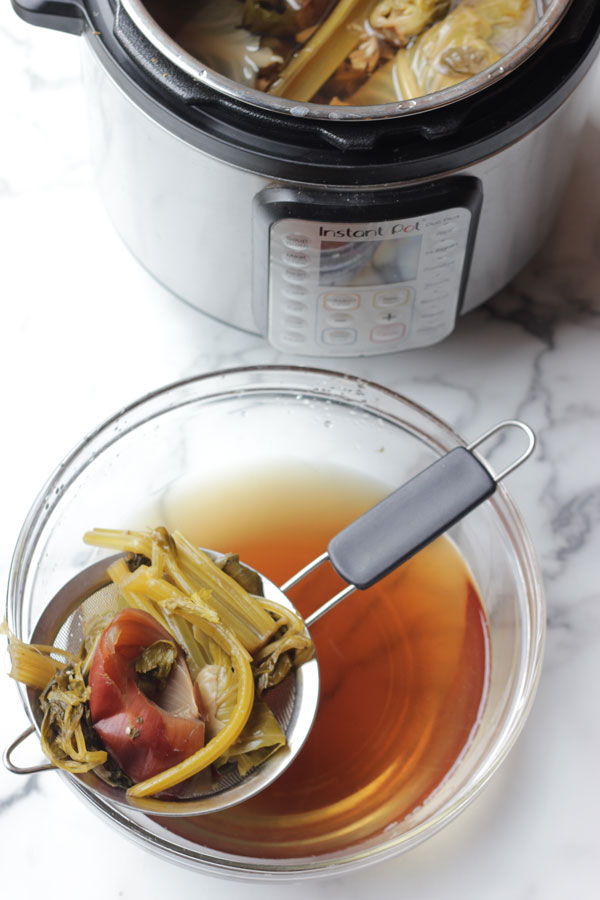 How Do I Store Instant Pot Veggie Broth?

Store your homemade vegetable broth in the refrigerator or freezer.  Homemade veggie broth will keep in an airtight container in the refrigerator for 7 days and in the freezer for 3 months.  I store mine in large mason jars with reusable lids, but you can also use an airtight container or plastic storage bag.  If you are freezing the broth, make sure to leave enough room at the top of your container for it to expand.

What Recipes Use Veggie Broth?

You can use Instant Pot vegetable broth in any recipe that calls for broth.  Soup is the most obvious answer, but I also like to use it in place of water when I am making grains, to saute veggies without using oil, or to make flavorful sauces and gravies.

Try these recipes to get you started: 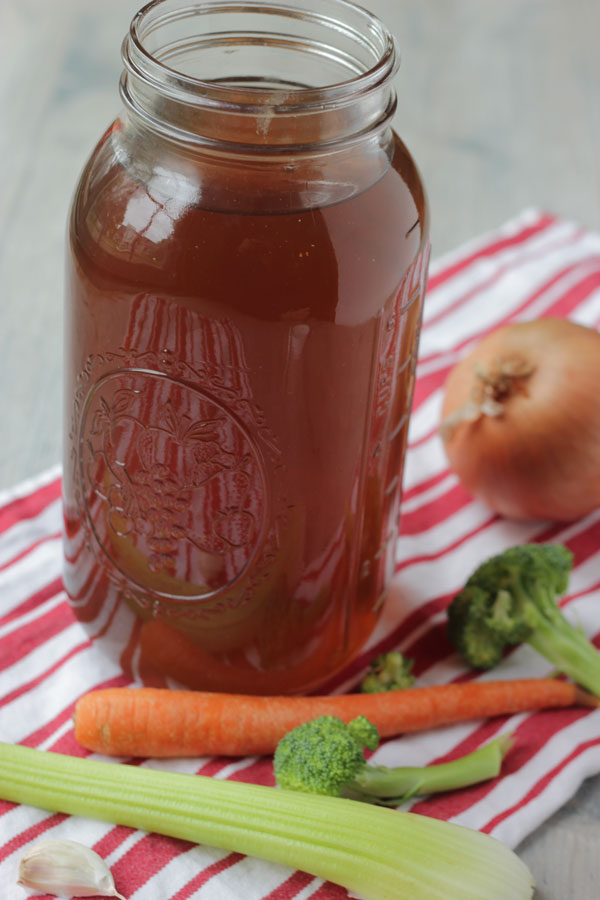 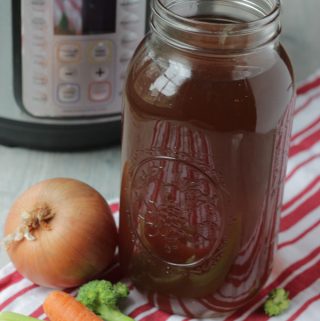 *If you don't have 5-6 cups of veggie scraps or veggies that are past their prime, use whatever veggies you have on hand such as whole carrots, celery, garlic, onions, broccoli, cabbage, peppers, etc. Use this broth to make soups, sauces, and more.  Or, try these recipes: Thai Coconut Soup Black Bean Tortilla Soup Cauliflower Alfredo Sauce